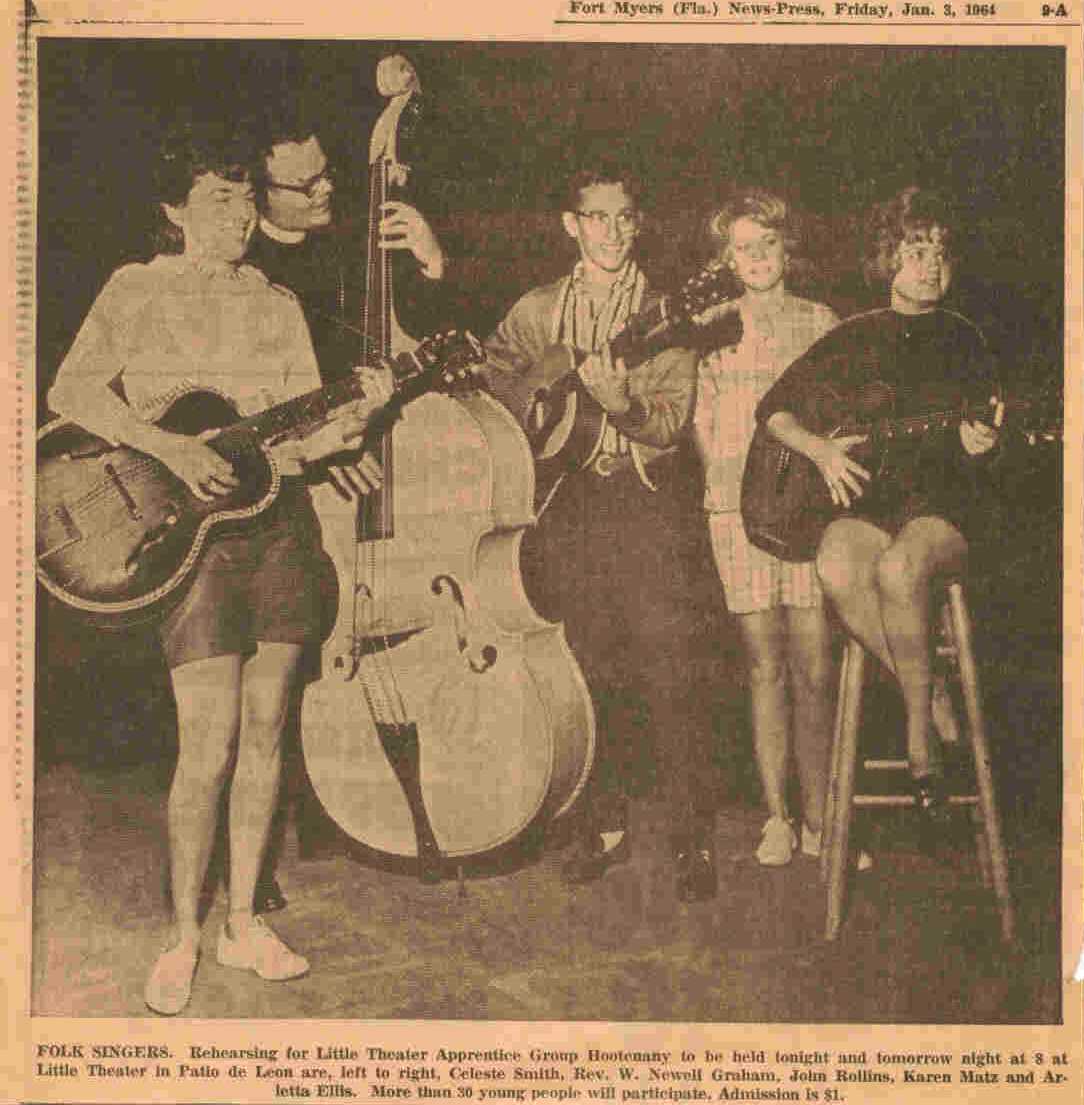 After my freshman year at FSU my diving career was over; all the joy had been drained from it by relentless practicing without any encouragement and my disillusionment consumed me. My grades had suffered as well and it was mutually agreed that I not return for my sophomore year to Tallahassee. So I returned to Fort Myers, Florida and enrolled in Edison Junior College (now University of South Florida at Fort Myers) to continue my "education". Without the diving training, I was free to pursue music (and other activities associated with the evil trade of music and musicians) and generally party like 1999. But the Folk Music Boom was in full swing and the air was filled with protest songs about the war in Viet Nam and civil rights. It was a heady time that urged you to get involved and stand for what you really believed in - I believed in playing music and partying.

I formed and early folk group with a high school friend, Celeste Smith, and her assistant church paster on bass; for the life of me I can't remember what name we used but I'm sure it was something bad - Shule Skerie Singers comes to mind... By this time I had also acquired a Gibson LG3 acoustic 6-string, used, from another player in town. Other groups were beginning to pop up but we had a little head start in terms of material, thanks to my early interest in the music, and managed to keep ahead of the pack. When Celeste went away to college I formed a new group with a friend, Vernie Brewer and Donna Gerstenfeld and we continued to perform in the local Fort Myers area. About that time I grew dissatisfied with my Epiphone 12-string and decided to upgrade it. Vernie, Rocky Owen, and another person I can't recall and I made a quick trip across the state to Fort Lauderdale's Ace Music store where I tried out various makes and models of 12-string guitars. When I played my 1964 Guild F-212 I knew I had found my new companion - we still play together occasionally and I still love the sound...

Later that summer a "business opportunity" presented itself and I became part owner of the first "Coffee House"/Folk Club in town, name "The Psychottage". It was a long storefront that had previously been Bud Miller's Paint Store and we leased it for the summer and renovated the interior with dark colors, cheap tables, uncomfortable chairs and benches and a small kitchenette area where we cooked overpriced burgers, sandwiches and such to go along with the outrageously priced sodas which were very popular because we did not use the air conditioner at night and it was, well, South Florida. Consequently, soda sales were strong. 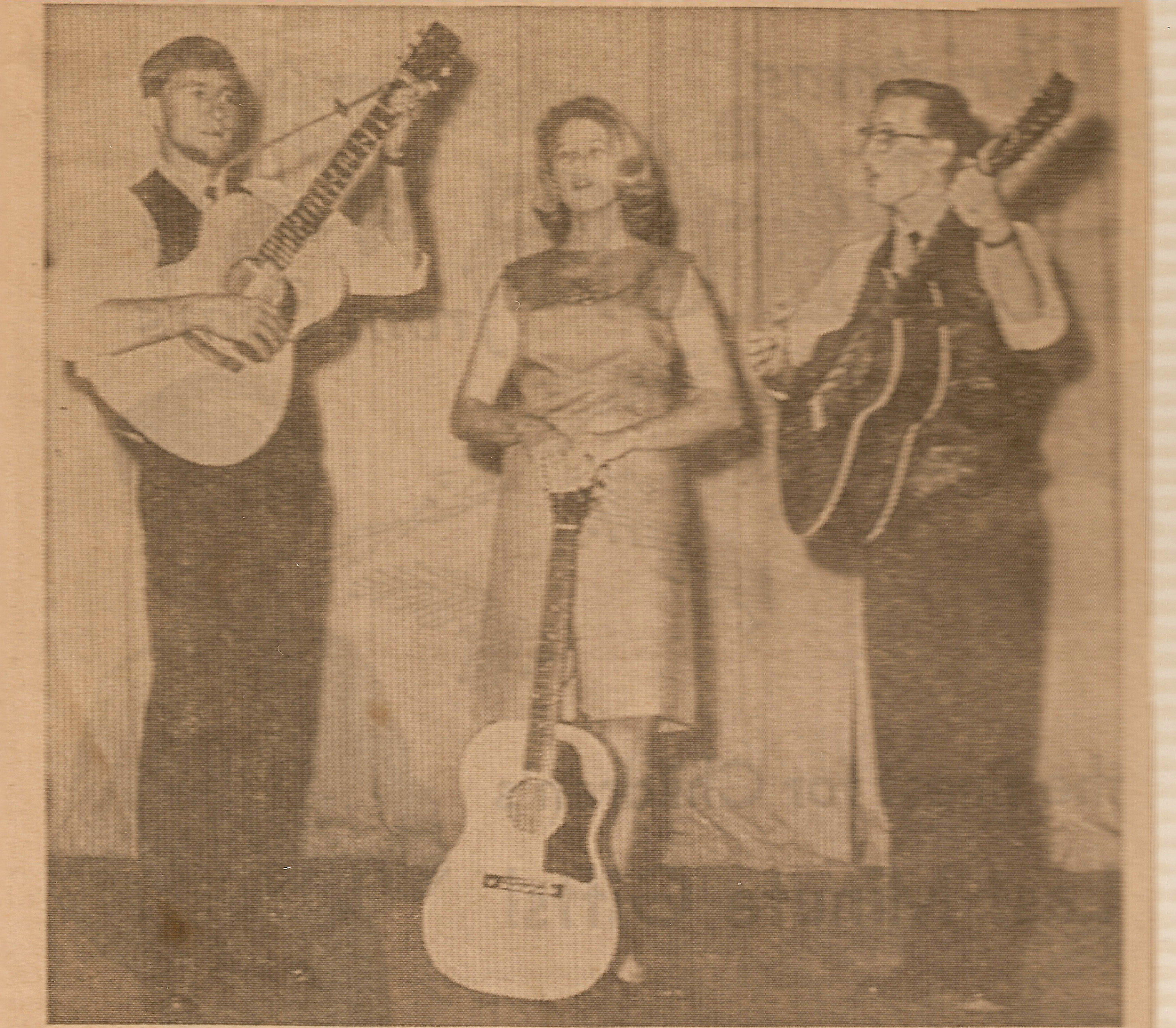 I took care of making sure we had enough performers to play every night and if we ran short I would do an extra set (or two or three) to fill up the time. I also made the decisions regarding the evenings schedule and order of performances so I was the one summoned when a young man wanted to know if he and his friend could play; the only problem was they were black.

For those of you not from Fort Myers, while the South was segregated, Fort Myers was not as radical as some but was in no hurry to hasten the acceptance of the civil rights movement. In fact, at that time, the theaters were still segregated and only the drinking fountains and lunch counters had been made openly integrated. So, when faced with a black group wanting to play in a white club, I said "Sure!". Turned out that they were part of a gospel group and didn't play any instruments so they got up on stage, apologized for not having accompanyment and proceded to bring the house down with acapella renditions of gospel numbers in 2 and 3 part harmonies. Absolutely wonderful!!! This, of course, did not go unnoticed by the local authorities who arrived on scene just after the singers had finished their third encore and had departed, promising to return the next night with the full 6-member group. The city police asked what was going on; I told them. They asked who had been there; I told them. They asked to see our licenses and lease papers; they were presented. They asked if this would happen again and I assured them it would. In fact, I invited them back to listen the next night and they did. The next night the gospel group kept their word, I kept mine and the police left after their set saying they had thoroughly enjoyed it (and the free burgers and drinks); we never had a problem after that.

By the end of the summer, attendance was beginning to wane as vacationers returned home and the locals began getting ready for school. Seeing the writing on the wall, I sold my share of the club back and agreed to continue "helping out" for free. It was worth it to keep the club open for a few more weeks but once school got underway there were too many other activities going on to enable the club to survive. By late October The Psycottage had past into history along with its notoriety as being the first integrated club in Fort Myers.