Welcome to Bozo's Guild guitar web pages... if this is not where you intended to go, please exercise the "Back" arrow to return from whence you came. Otherwise...

My first exposure to Guild guitars came in 1964 when I decided to trade in my Epiphone 12-string guitar on a better model. So three of my friends and I piled into the car and headed for Fort Lauderdale's Ace Music Store to see what was available. While I no longer recall the salesperson's name, I remember he took several minutes to ask me about what I was looking for in my new 12-string and, after hearing my responces, led me directly to the Guilds. Their amazing bass response and clarity hooked me immediately and I returned to Fort Myers that day with my brand new F-212 wrapped in my arms.

The tone produced is what you would expect from a mahogany-bodied 12-string with larger dimensions than this early model. Its deep projection and bright, clear tonality belie the relatively small dimensions of the body. The neck is relatively flat and wide, which took me a while to adapt to; it is wider than any of my other 12-strings at just under 2 inches. This 12-string is slightly more difficult to play than my other 12-string guitars due primarily to the string height; I have never had it set up for my particular playing style and suspect it would benefit greatly from that.

In the early '70s, my friend Rail Guthrie borrowed this guitar to do the fret marker and headstock inlays. The headstock design has been designated the "Tallahassee Turkey" by all and the fret markers are very tastefully done. At the same time, Rail replaced the original, plastic head tuners with gold Shallers; unfortunately, the mini tuners weren't available so regular tuners were used which makes a tighter fit but are still functional. I may replace these with the mini-tuners at some point... or not.

When there was evidence of the bridge pulling up in the late '70s, I returned the guitar to the factory, then in Westerly, RI, for repair and that proved to be a mistake. Not only did it return with a finish that looked to be about a quarter of an inch thick but my original, indestructable hardshell case had been replaced with a current and more flimsy model. I called the factory to have this corrected and was told there was no way they could locate it - so someone there acquired a vintage case and I got screwed... 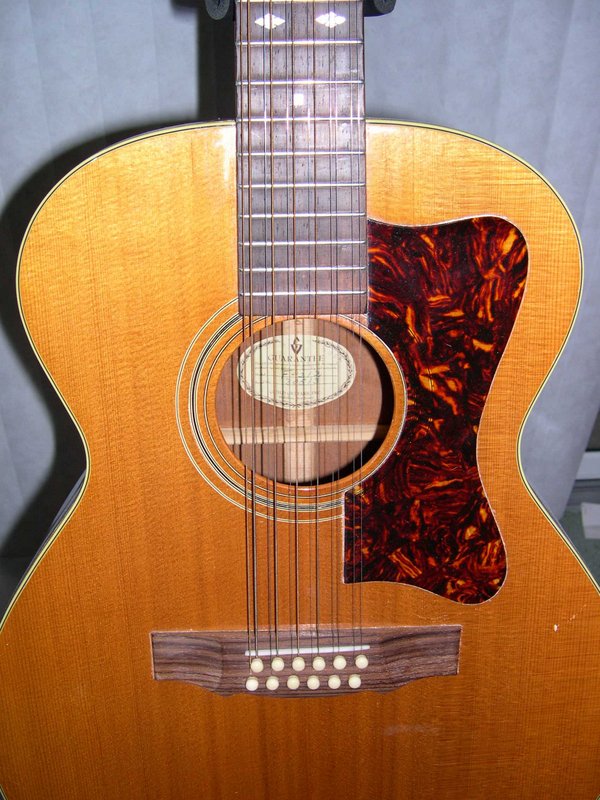 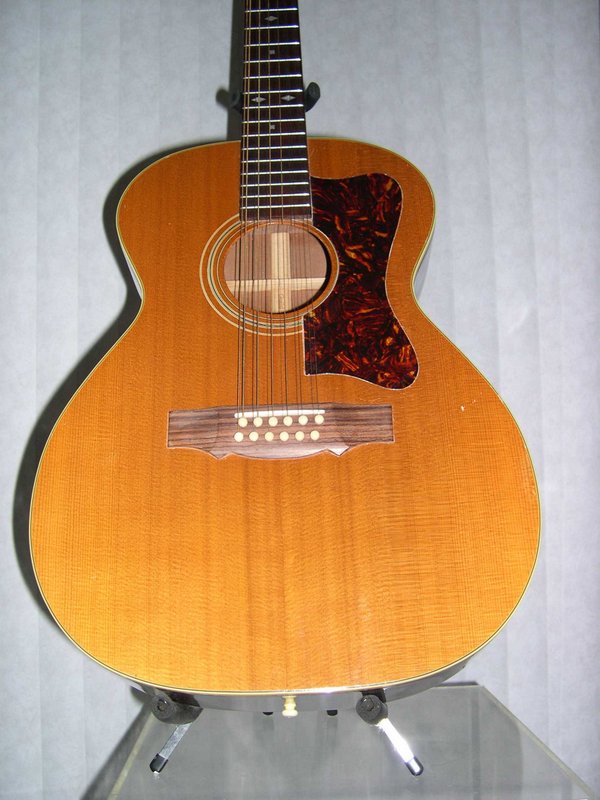 So concludes the presentation of my 1964 Guild F-212 guitar. Feel free to contact me with any questions and/or comments. *8o)