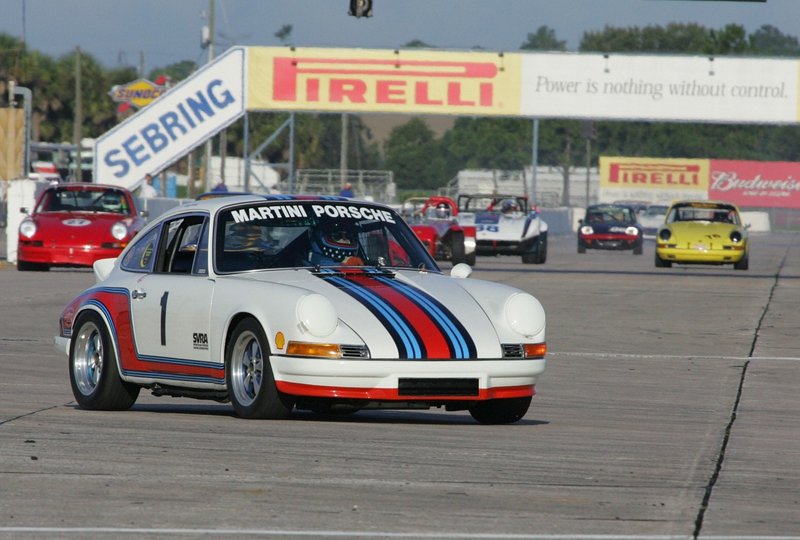 This car was originally purchased as a 911T in 1972 to replace my Porsche 912 which was beginning to show the results of being driven during the winter months in New England. I happened to see it at the Annis Morrill dealership on my way home from a trip to Data General and stopped in to get the particulars. One test-drive later I was sold. It was my primary car until 1975 when, driving on city streets, the timing chain skipped and damaged some of the valves; during its repair period I acquired a Toyota Celica GT and that ended the daily use of Thelma. Sadly, she was relegated to the role of "garage queen" until I relocated back to Florida in late 1980.

She maintained the same role in Florida until the spring of 1983 when a local radio station ran a "fun rallye" for charity and I thought it would be fun to take her out for a relaxing afternoon drive. All went surprisingly well and I was overjoyed to meet a lot of other people who shared my interest in sports cars and related events. Over post-event drinks (several) they told me about an upcoming autocross event being held at the local highschool parking lot and suggested I come out to watch or participate. It had been years since I had driven competitively but it sounded like fun so I decided to enter.

Others recall the appearance of Thelma at that event with some level of mirth - many recall how they thought she might become airborne due to the jaunty manner in which the nose was lifted whenever the accelerator was used. "It looked like a big, white pond bird trying to lift off." Kyle once told me. Seems like the shocks might have gone bad after sitting for, oh, seven years... I think I was running the same tires as well so to say that I was uncompetitive in the class would be an understatement. On the next to last run, the car failed to start in staging. Finally this guy came over, lifted the deck lid and did something to the distributor and, suddenly, she sprang to life again. Later, I approached him and asked what he did and he mumbled something about points and timing and TDC, blah, blah, blah. It took me several minutes to get him to admit that he was a Porsche mechanic. After many more minutes I got him to agree to work on the car if I brought it in. That's how I met my career-long mechanic and good friend, Dennis DeFranceschi. The rest is, as they say, history. 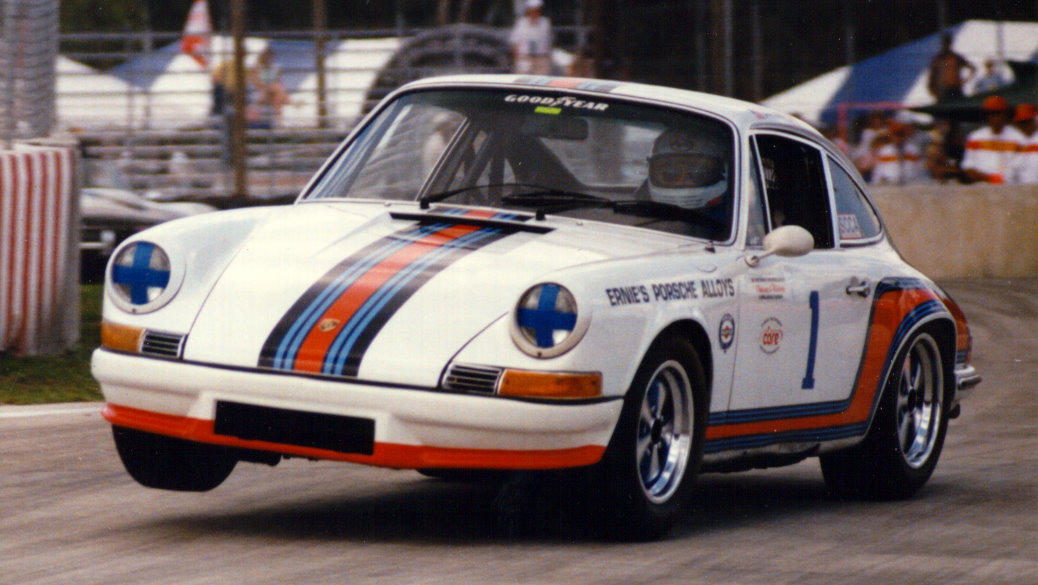 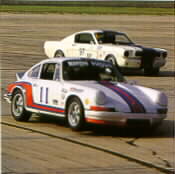 It was not until 1987 or so that Thelma took on the characteristics of a "ST" with the small rear flares. These have been retained through two "restorations" due to on-track events and are true to the period. All body panels, aside from the front and rear bumpers and ducktail are steel; I have the original flat, steel deck lid (in matching paint scheme) as well. The 15" wheels are 7" wide in the front and 8" wide in the rear running 205/50 tires in the front and 225/50 tires in back. There is a 18-gallon fuel cell installed low in the front and a full interior roll-cage welded inside the vehicle. Double side intrusion bars are present on both sides. The roll-cage in NOT tied to any of the suspension pick-up points and is fully SCCA Vintage legal (and comes with log books from SCCA, HSR and SVRA). This is an SVRA-Medallioned, Group 6 car that has run with SVRA beginning in 1988. It also ran regularly in the Carteret Historic Group races in downtown Miami (with IMSA races), Tamiami Park (with the Indycar race), West Palm Beach (with IMSA races), Tampa fairgrounds (with IMSA GTE races), downtown St. Petersburg (with TransAm races and St. Pete GP), Sebring, Daytona, Hialeah Park, Homestead Raceway, Moroso Motorsports Park (PBIR) and Roebling Road. It was also raced at Road Atlanta with the Mitty, SVRA and VDCA. It is probably one of the more-recognized Vintage cars due to the number of years it has been racing with its livery virtually unchanged. 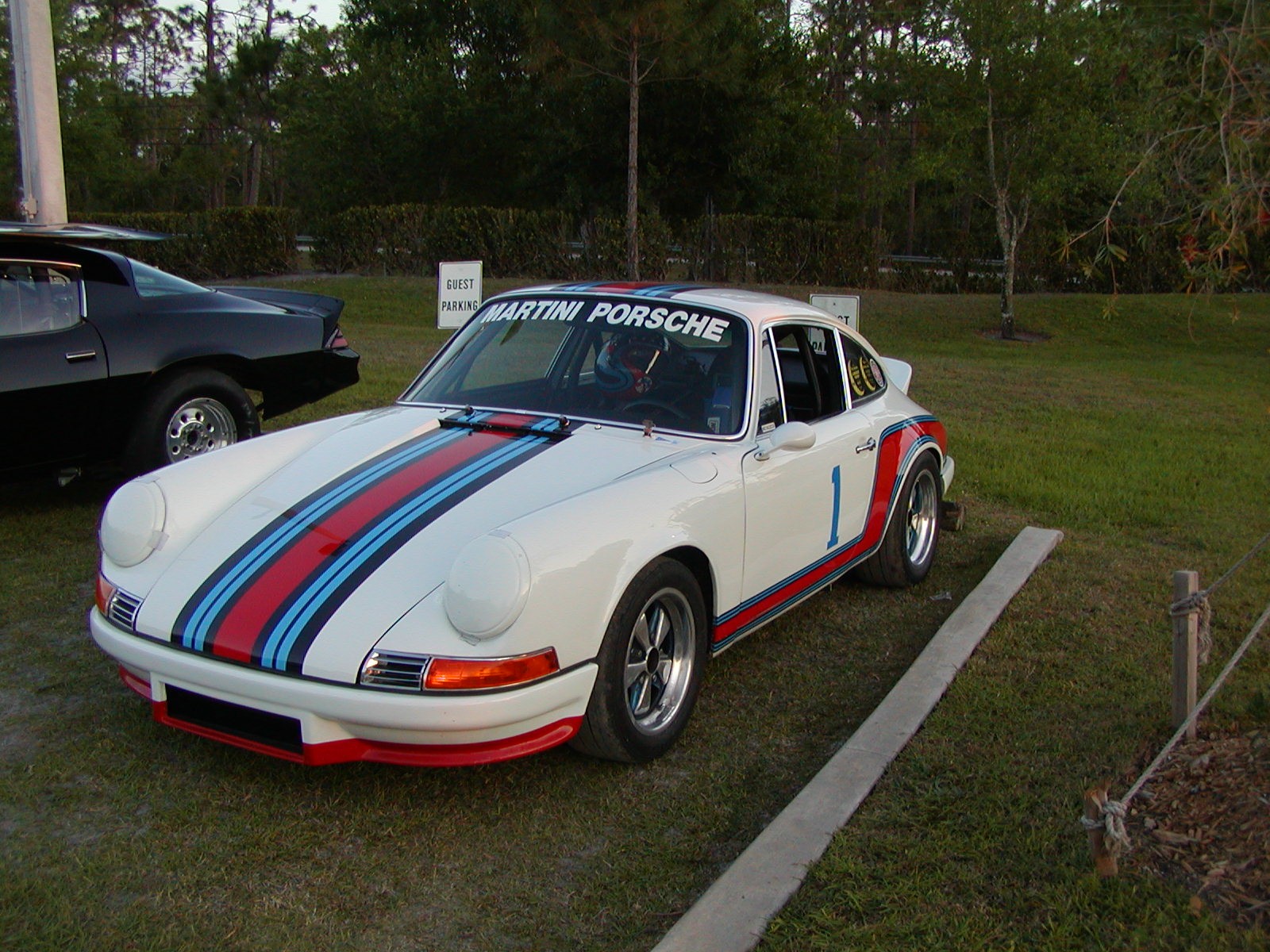 As most know, Thelma went through a major restoration in 2002-2005 (delayed by the hurricanes in 2004 & 2005) when it was discovered that the subframe had internal rust issues and had to be completely replaced. This was all done by the shop "3 Craftsmen" in Pompano Beach, FL that used to do most of the 901 Shop cars. It came back to me and right into Dennis' workshop where the suspension was rebuilt, the alignment was set and the car was made track ready. The first race weekend back (2007) on the track on the Sebring short course showed that it was 3 seconds a lap faster than the previous outing at the same track; I guess it helps when the suspension geometry is not infinitely adjustable! We continued to make minor adjustments with the setup until I retired and moved to NC in late June of 2008. Since that time it has resided primarily in the trailer aside from regular exercising around the neighborhood and an occasional Vintage race at Kershaw, SC (2009) or Road Atlanta (2010). Most recently, the throttle linkage and transmission was rebuilt and, following the Road Atlanta race, all four brake calipers were rebuilt and the front rotors were replaced; this made a world of difference in both acceleration and braking!

Now, having seen where we started, where we've been and where this car could take you, the only question is, "How badly do you want it?". Asking price is $90,000, including the Vintage, ex-Smothers Brothers, enclosed trailer which measures 20' by 8' and comes equipped with electric brakes, electric winch & tailgate and spare tires. What more do you need?