This is the first Taylor guitar I ever played and is the one of the two Taylors I own with the 1-3/4 inch nut, so favored by finger-style players. This takes a little adjustment for me but after a short period it feels very natural. This is a Grand Auditorium style guitar and, as with many of the smaller-bodied Taylors, there is no pickguard affixed to the top which is common on the Taylor fingerstyle models. Unlike the K22, a fairly "plain" looking guitar, the W14C is almost garrish with its abalone purfling and soundhole rosette. Add to that the early 900-series fret markers (fler-de-le) and headstock design and you have one impressive-looking instrument. All this is made even more apparent by the red cedar top which adds to the visual stunning of the guitar and adds warmth to the tone as well. It is name Verlon, after Verlon Thompson, the first person I ever saw playing a Taylor guitar and the person who most influenced me to try one for myself.

The specifications for this guitar are listed on the Taylor Guitars website under the Grand Auditorium style of guitar (now referred to with the GA suffix) and includes the wider, 1-3/4 inch nut width, mentioned above. The back and sides are made of Claro Walnut and the top is Western Red Cedar - a winning combination. It has a single cutaway for access to the upper frets, though this is rarely used in my playing (them's rock & roll frets!). The neck profile is more rounded than the early, super-slim necks but is by no means club-like; it is a nice, rounded shape which feels comfortable almost immediately.

This is a stunning guitar which was in perfect condition when I bought it and remained that way until I dropped a capo into the case, causing a chip in the cutaway finish. Later, I managed to let the top close while I was removing the guitar from its case; this allowed the latch tougue to embed itself partly into the top, a flaw that was later repaired by Ross Teigan of Teigan guitars in Naples, Florida. The original Taylor "Pink Poodle" hardshell case is also in mint condition (and remains that way). In the later pictures you will notice a custom truss rod cover has replaced the stock cover (which I retained, of course) - an eBay purchase from Argentina which I think complements the headstock. 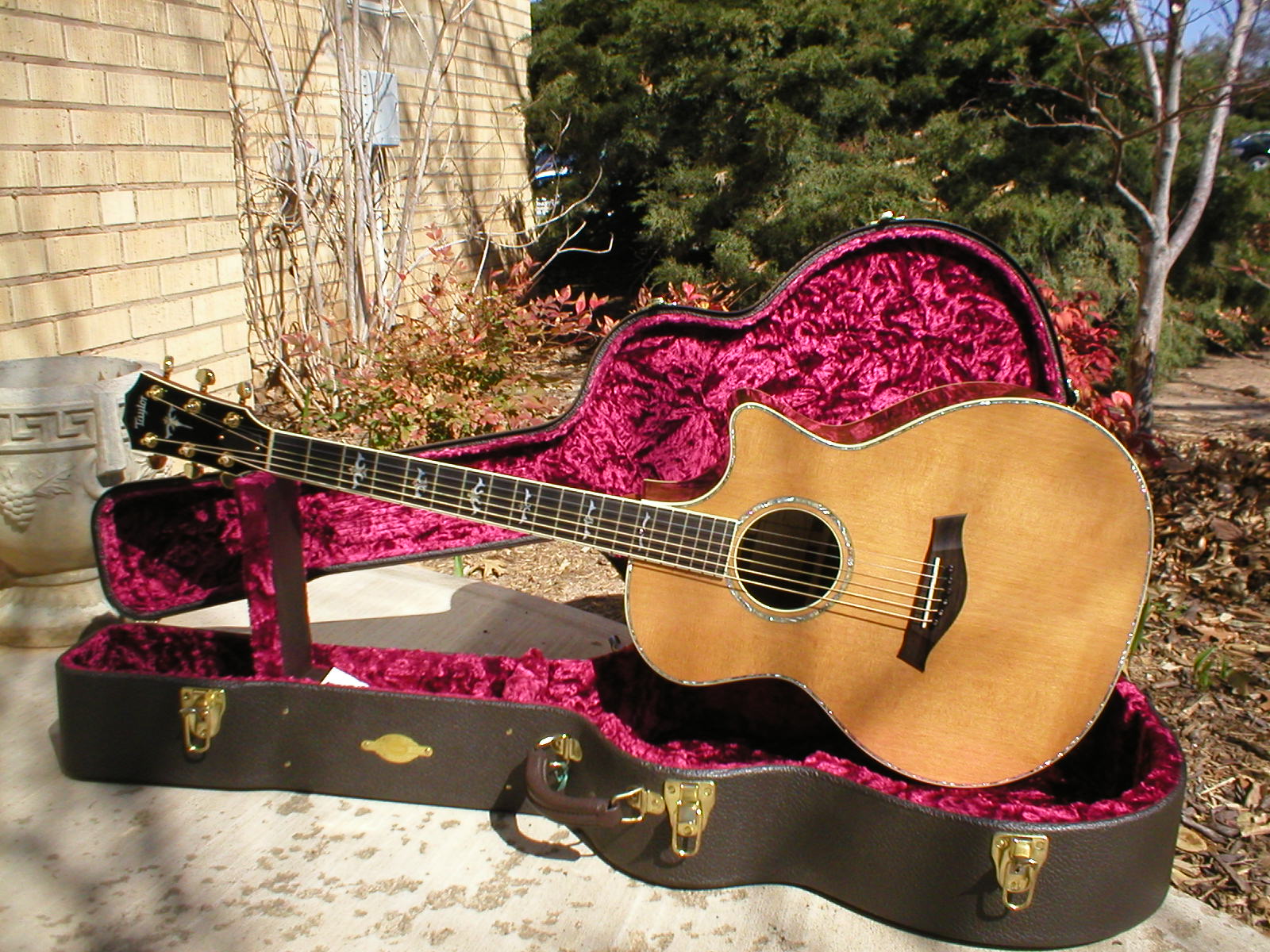 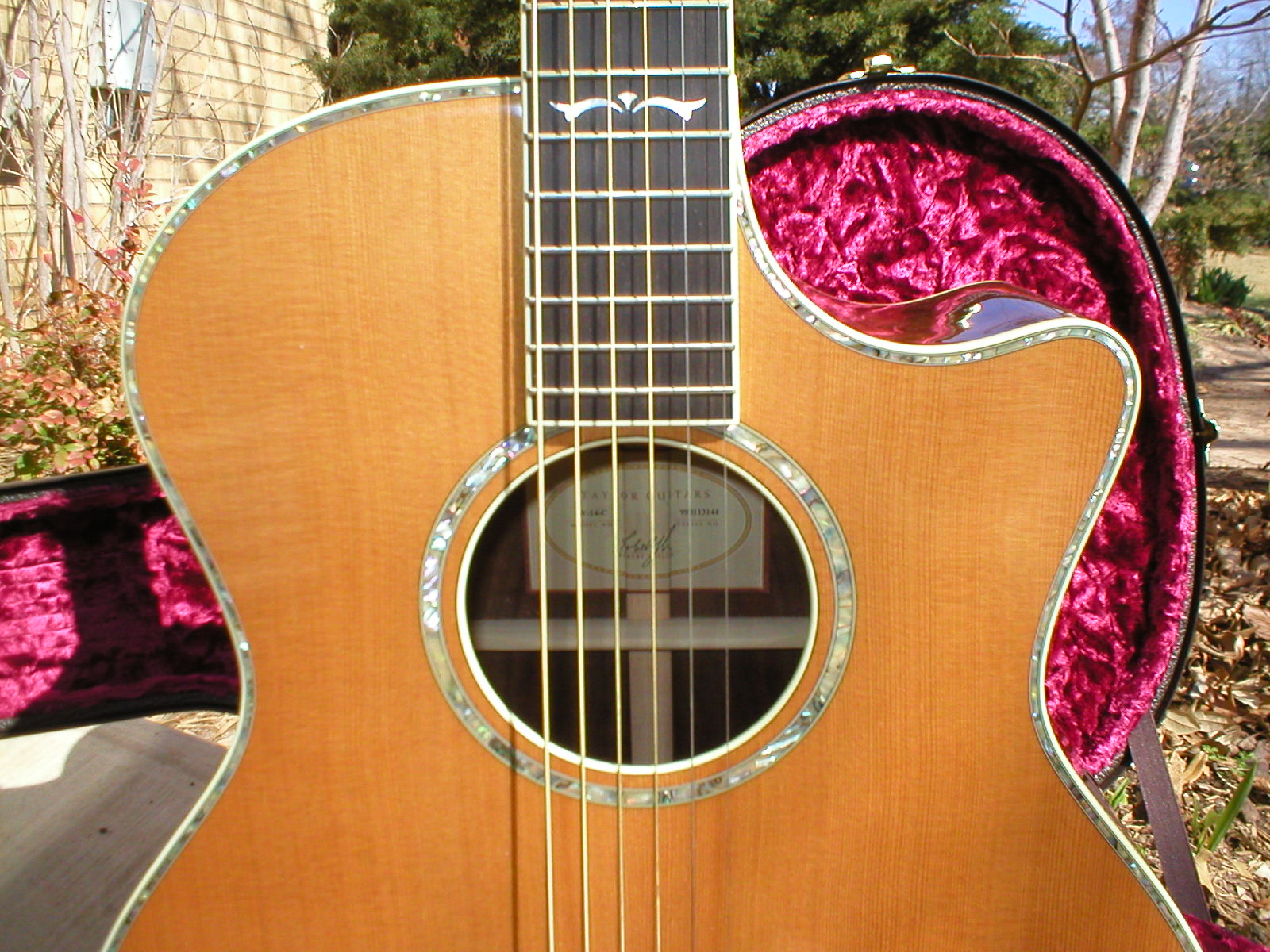 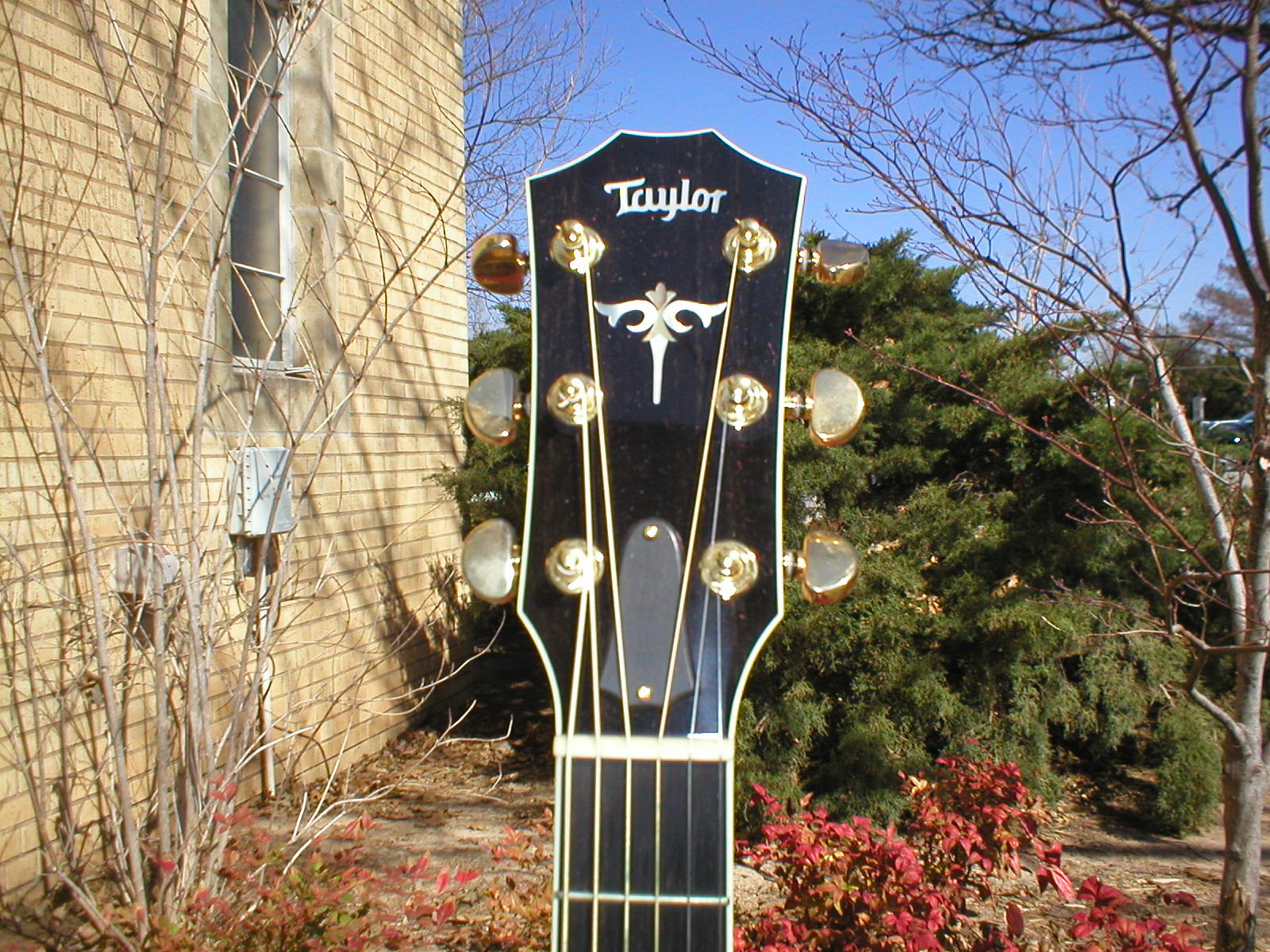 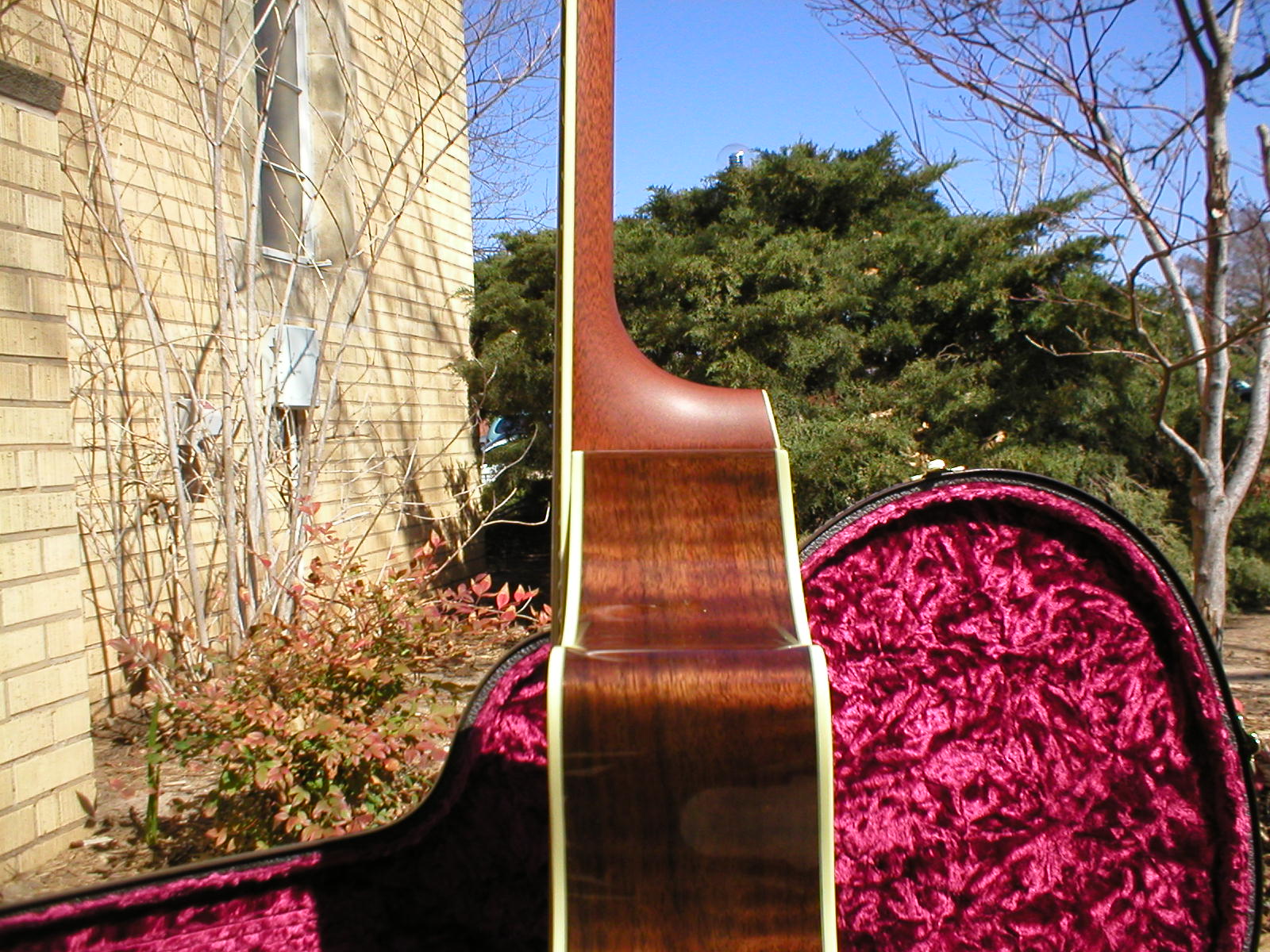 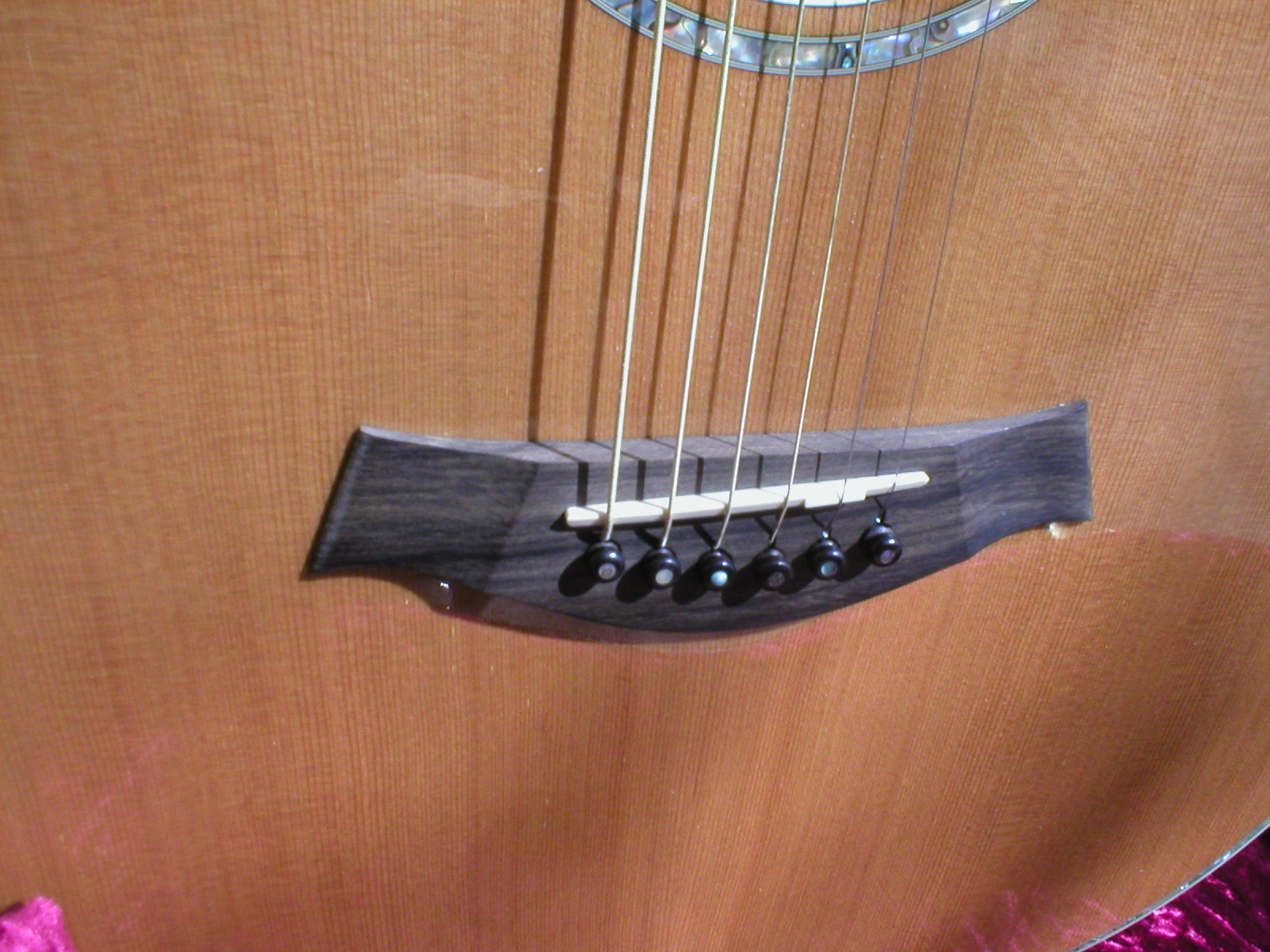 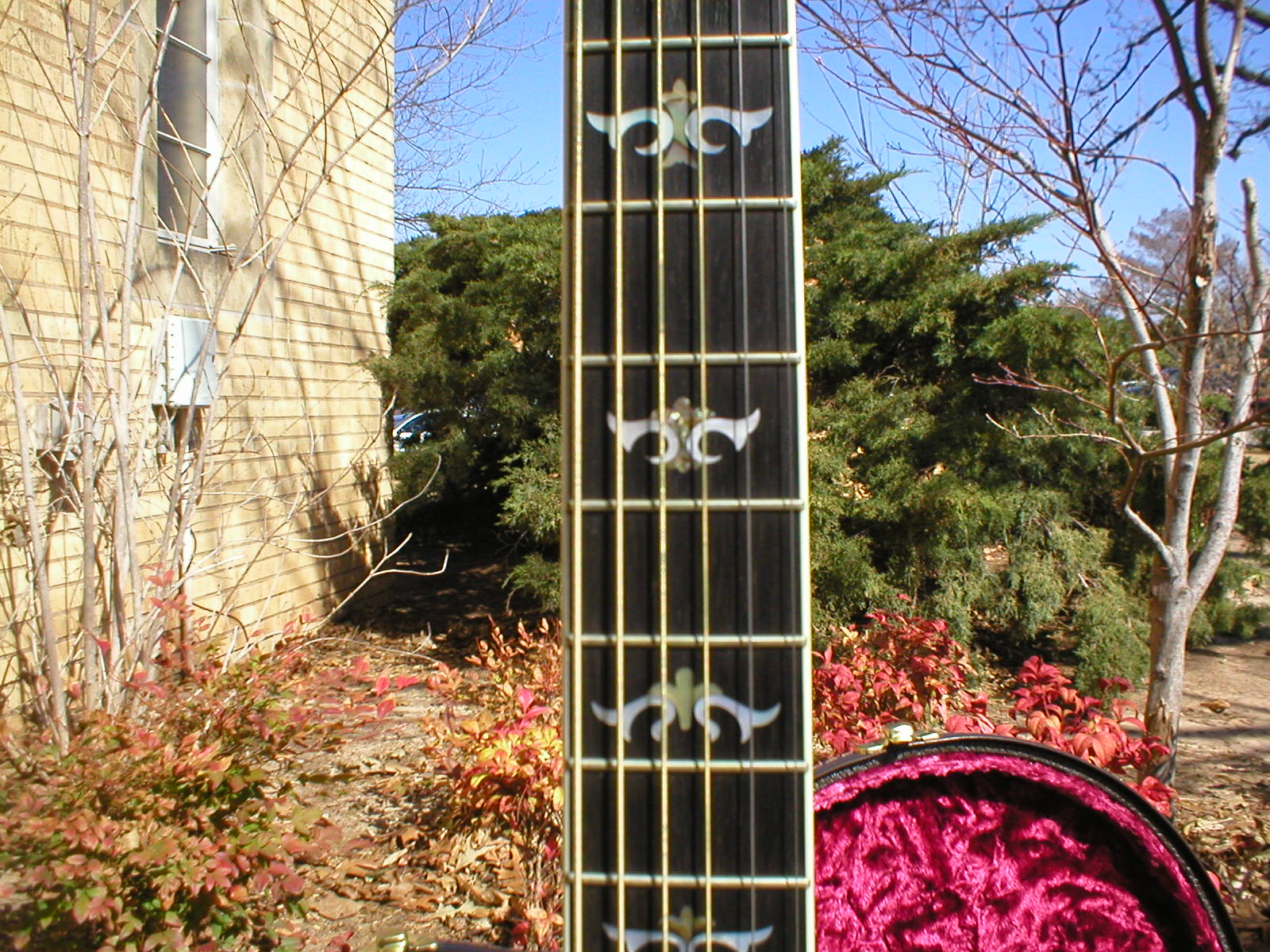 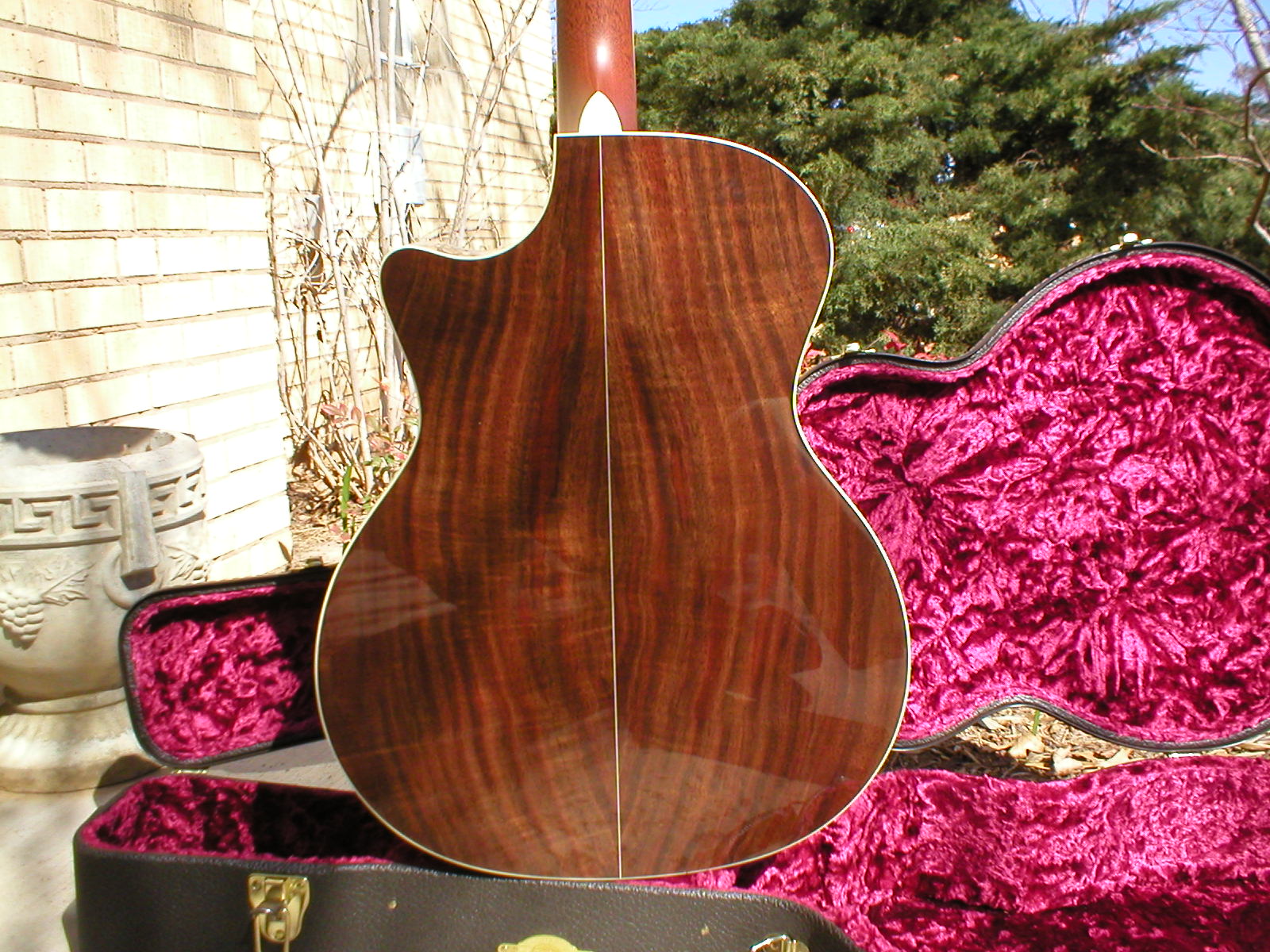 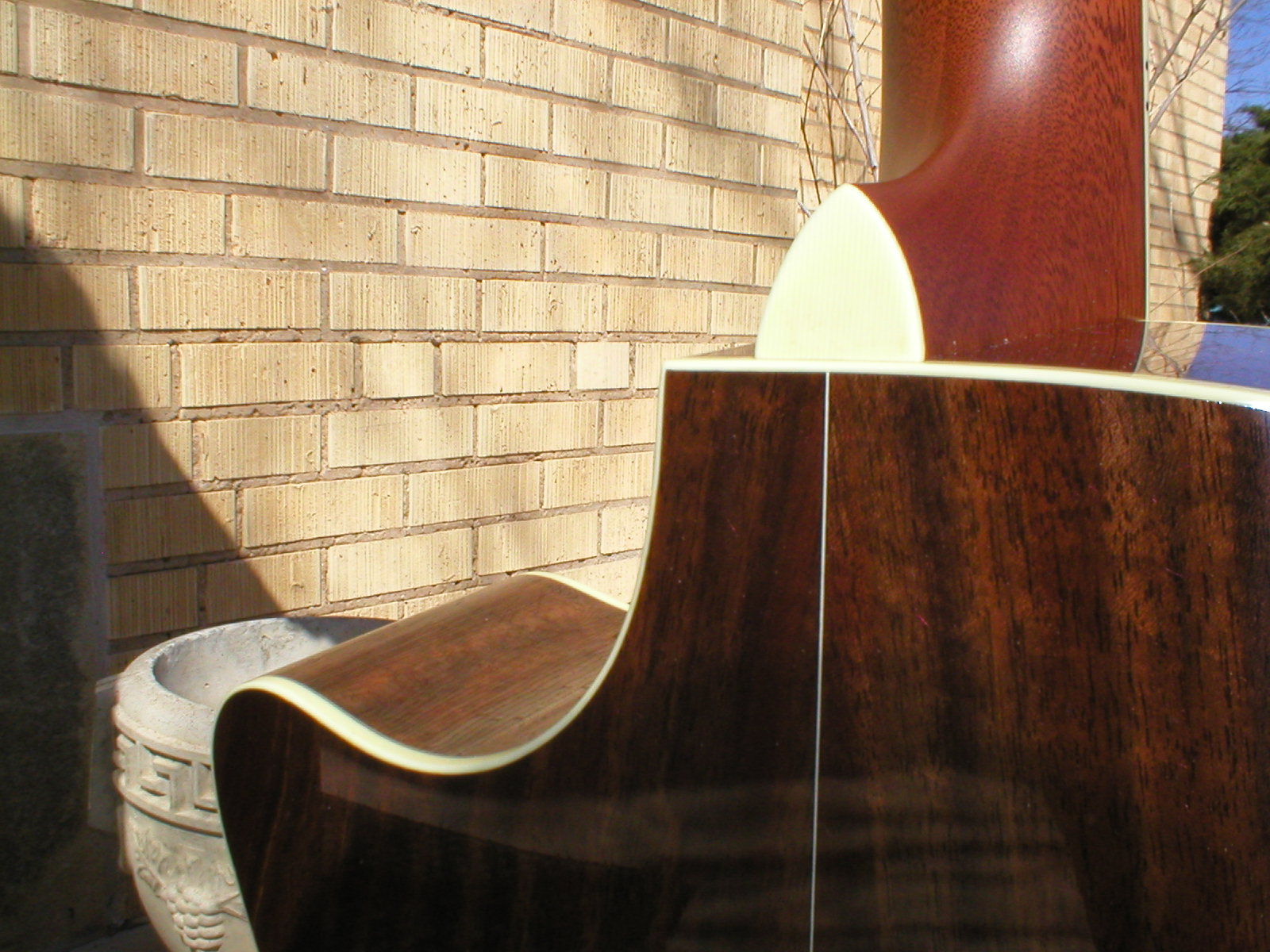 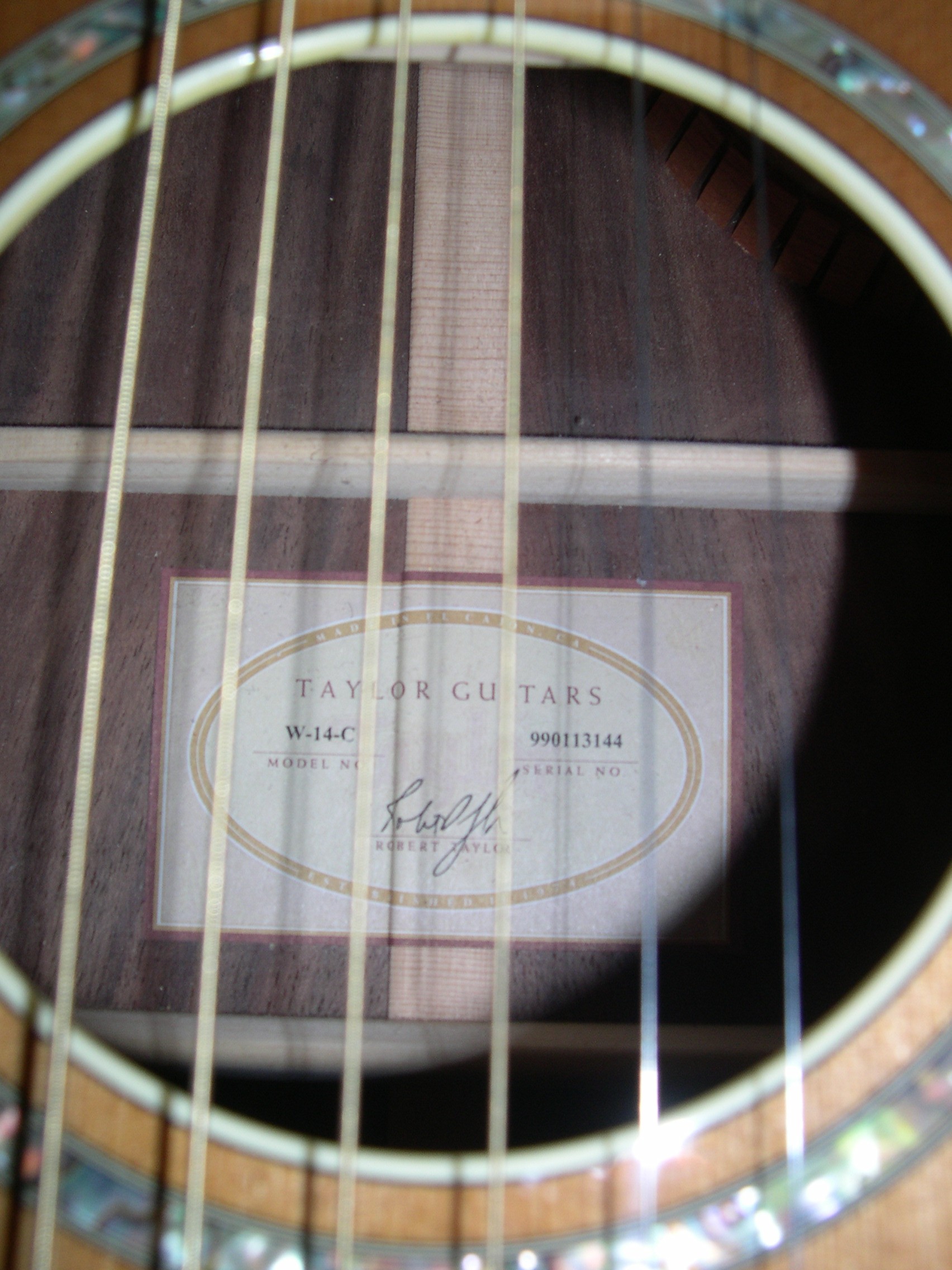 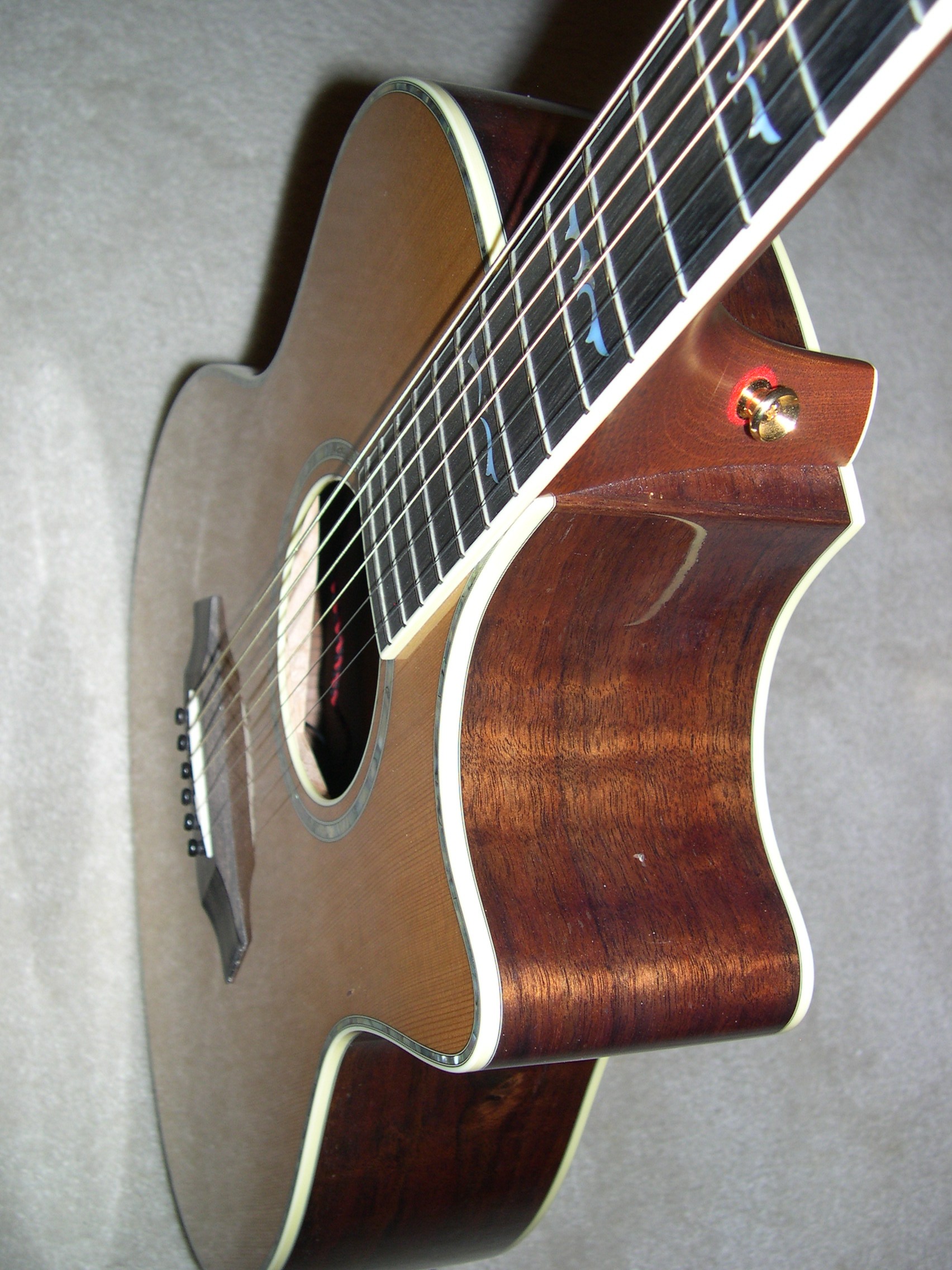 The guitar came in the original Taylor "Pink Poodle" hardshell case, shown above, which is in mint condition. You can here a short sound-bite of this guitar by clicking here...

So concludes the presentation of my 1999 Taylor W14C, a real treat for both eye and ear. Feel free to contact me with any questions and/or comments. *8o)