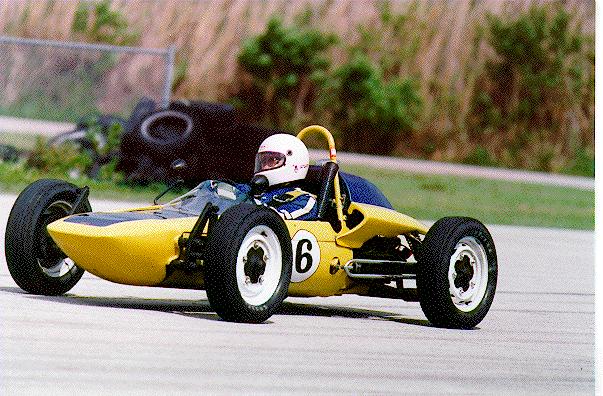 The inaugural recipient of this award is Sandy Jackson. Sandy has been involved in the SCCA Vintage Program since its recent reactivation in one way or another. First she was involved as crew for her husbands car and now she has added registrar and driver to her credentials as well! Always around the Vintage Paddock with a smile and words of encouragement, Sandy expressed her thoughts (several years later) on receiving this award as follows.

"Since I was born in Speedway, Indiana, within sound of the 500 track, I suspect that auto racing may be genetic, if not also environmental. While my mother always tuned in the annual Hoosier Indy 500 ritual on the radio as I was growing up in Arizona, I always suspected that it was more for the singing of Back Home Again in Indiana rather than the actual gasoline alley action. Nevertheless, I did always seem drawn to those British cars. After all, in college, Mike Jackson lured me with a Sunbeam Alpine, and we went on to own several Triumphs, an MGA a Jaguar, and an Austin-Healey Sprite. I was in my 40's when Mike announced that he was going to take a Skip Barber course at Sebring so that he could race his Triumph TR3. "That sounds like fun, I agreed," and the rest, as they say, is history.

Skippy School was, next to teaching English, one of the most demanding, exhilarating things I had ever accomplished, but it took several years of supporting Mike's vintage racing habit before I gathered courage and money enough to get my own car. Bobby Sees had restored a 1968 Beach Mark 5C Formula Vee and was showing it at Moroso one winter at a SVRA event when I "tried it on." Despite my long legs, it fit. I fell in love, bought the car, and went to drivers school at Savannah and Daytona. Driving the Beach was always more like putting the car on rather than getting in. The Vee is so responsive and forgiving that I often said, "It's amazing! You only have to think it around corners".

Turns out, unfortunately, that I'm not a very fast driver. I make a much better Registrar than race car driver. Despite the support I got from Mike, my SCCA co-workers, and even Gene Beach himself, I never did progress much beyond "designated back marker" in the vintage field. But driving a Vee is a lot like teaching: trying to get the maximum performance out of limited capability. I did race for 10 years or so before my arthritis convinced me that I'd be happier watching than driving.

Being awarded the Spirit of Vintage Racing trophy, which I nicknamed "The War Memorial", was an honor I never anticipated. The fact that the award is conferred by vote of the Vintage drivers makes it especially meaningful and personal. The drivers who have been elected to join me on the Trophy are some of the most wonderful people that I have ever known or hope to know, and I will never forget them."

Congratulations to Sandy on her being the first to receive this honored award!