Once back in Tallahassee I had taken up residence in a small cottage off campus with just enough room for me, my clothes, my records and my musical instruments. I would go to class and then return home to play and, time permitting, study for the next class. It was during one of these rare, quiet moments that a knock on the door was heard and I opened it to find the landlord's daughter, Susan Bloodworth, standing there in her cut-offs and sun-blouse. (Don't worry, it's not going there... yet...) She said she'd heard the music and wondered if I was playing around town somewhere. I told her that I was only staying in practice while going to school and invited her in. We talked for quite a while as she shared many of the same favorite artists that I did. In any event, she told me of some of the clubs in town that I might enjoy and then left to return to the "big" house. It was nice to have a kindred spirit so close.

I began to go by some of the clubs when I had the time and during one of those visits I ran into a guy from Fort Myers that had played at Psycottage a few times; his name was Darryl Guthrie but he was now going by the name of "Rail". (This name was given to him by Larry Murray, the host of "Hoot Night" at Doug Westin's club, The Troubadour, in L.A.. Larry, who hailed from Waycross, GA, called him "Derail" for a while and then just shortened it to "Rail" - it stuck.

We talked for a while and he asked what I was doing musically and I told him I was just staying up with it and didn't have any plans to try to play out. He said he was singing with this girl that had a "pretty good voice" and asked if I was interested in joining them to see if there was anything good there - of course I said "Sure". So the following week I went over to the apartment he was sharing with 2 other students. I went in with my "toys" and he introduced me to his singing partner, Rita Coolidge. She was very slim with this dark straight hair and the high cheek bones that let you know immediately there is some American Indian heritage not far down the line. She was very pleasant to me and I tuned up while they finished whatever it was they were arguing about; that's how it all began. When they started singing I knew there was a place for me - even if it was only as their guitar player. As it turned out, it was a great combination and we decided to pursue it further and see where it would take us. Before long I moved in with Rail and his roommates, making it more convenient for us to practice (and more difficult for the others to study). By the end of the fall trimester it was clear to me that I had little interest in a career in research physics or mathematics so I declined to register for the next session and took a job at the local paint store (Sherwin-Williams of course) to cover expenses; this freed up even more time to devote to my music. 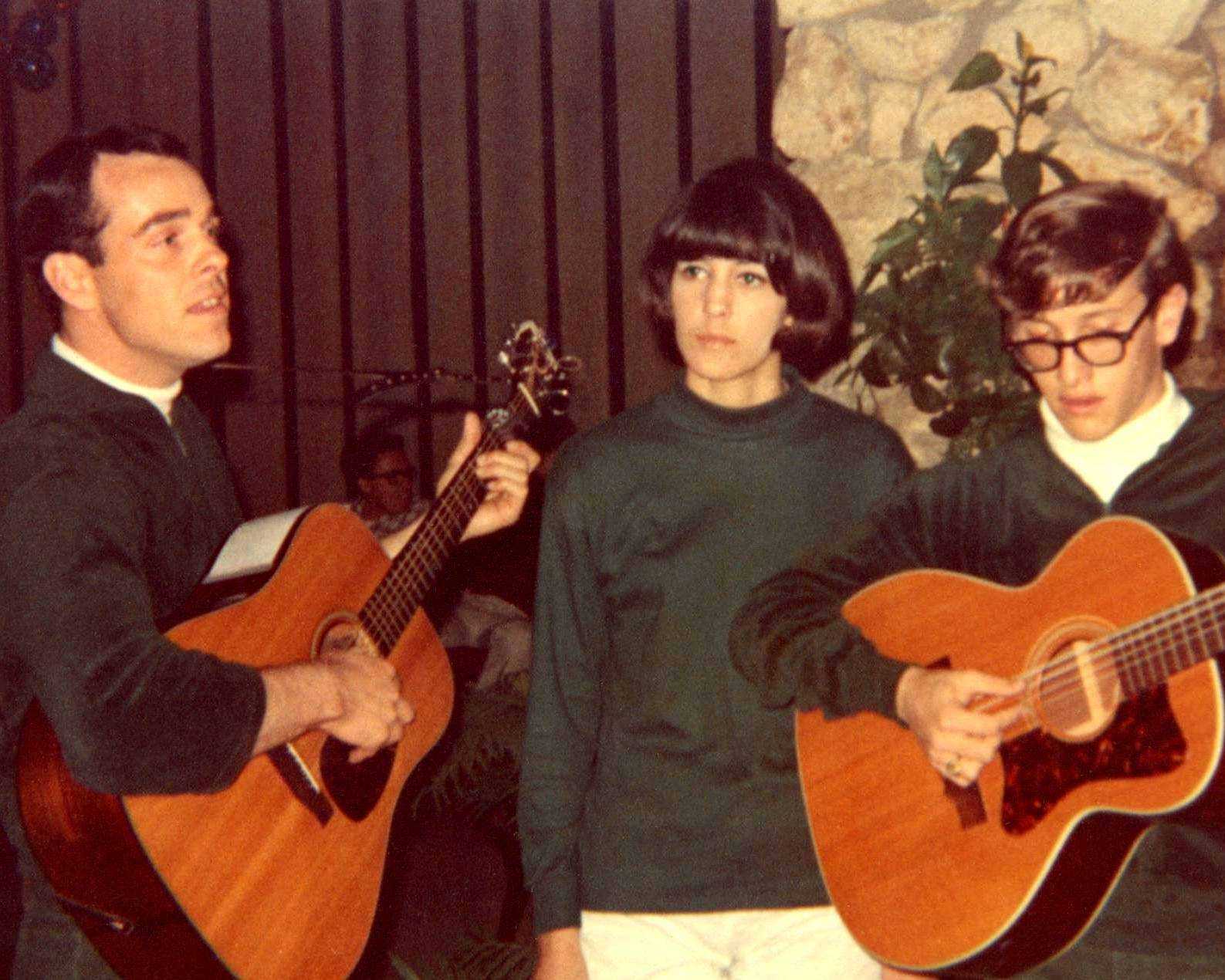 The Folk Boom was alive and well at FSU and several groups were playing around campus. We had taken the name "Rita, Rail and Raker john" and were one of the better known groups. Another of the top groups was headed by John Pearson and his girlfriend, Wisty Mixon from Perry, Florida. John was a very good player and singer and Wisty's voice was good as well - it's a shame I don't have any recordings of their work. Anyway, Wisty lived in an apartment that was catty-corner from ours so there was music always going on in one of the two places. Parties were just another excuse to get together and play music - and we played a lot!

My influences started to include artists other than the mainstream of PP&M, Ian & Sylvia, Odetta, Judy Collins, Joan Baez, and Bob Dylan; I began listening to Phil Ochs, Tom Paxton, Pete Seeger, Eric Von Schmidt, Dave Van Ronk, Jim Kweskin's Jug Band, Jim&Jean, Eric Anderson, Fred Neil, Mark Spoelstra, Dick Rosmini, Tom Rush and countless others. I was able to pick up bits and pieces from each though never acheive the whole of their performances (I think it's called "talent"). Many of the tunes I learned were then rearranged (to eliminate all the really hard chords) for the trio as we expanded our set lists and grew as a unit.

We became the Friday and Saturday night "house group" and the Le Roc Lounge in the Hotel Duval in downtown Tallahassee for the winter and following spring trimesters. We developed a loyal following of some students and quite a few of the local residents who would show up every weekend. One couple I remember came in every Friday evening and always requested "Twenty-four Hours To Tulsa"; this happened to be on one of my Ian & Sylvia records so each week I would promise them we'd learn it and play it the following Friday. It became a running "in" joke with them and I never did learn the tune...

During this time, one of the local DJs, Jim Scanlan (a player in his own right), took notice of our group and offered to do some recordings of us at the station. We made about 6 recordings there and some more at his home on his home tape recorder (it wasn't very sophisticated back then). These would be considered "demo tapes" today but back then it was something special! Thankfully, Jim kept the master tapes safe over the years and was able to convert them to a CD so we could all have a reminder of those days. Even so, it is a reminder of the days when "stereo" meant a right channel and a left channel with no mixing of the two other than relative volume. Sadly, the tape medium showed its age in some places as well but it is a nice thing for us to listen to and refresh the memories. This is only one example (and is the jazziest tune we did, arranged by Becky Ellis, a friend of Rail's) but you can hear the vocal qualities of Rita and Rail clearly. Most of our renditions were closer to the versions done by the artists we learned them from, like Martin & Neil's "Tear Down The Walls". For the complete set of songs preserved from that period, go here. 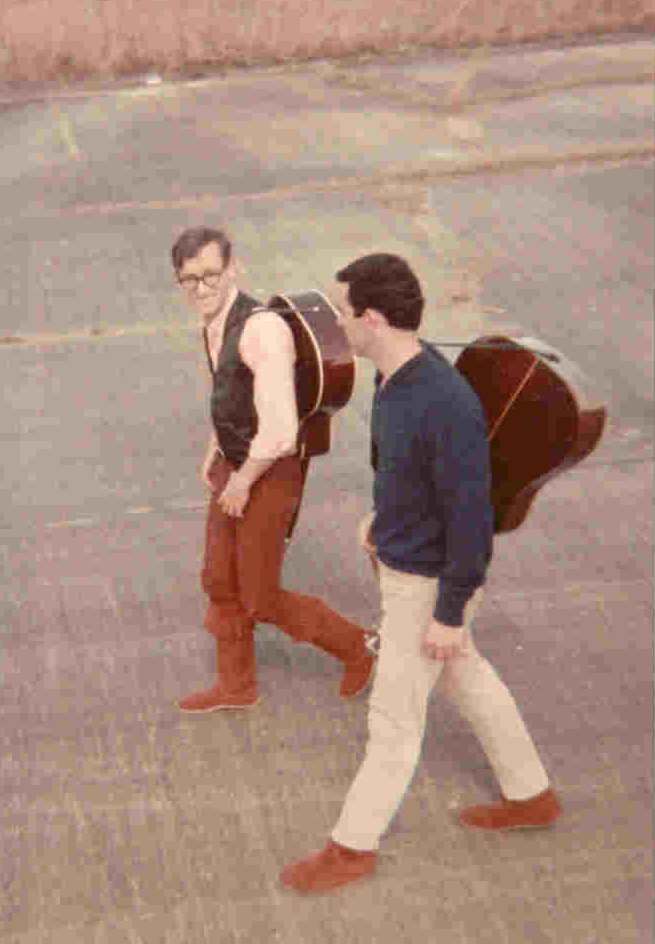 As the end of spring trimester drew closer, it became clear to me that I had some decisions to make. I was living in an apartment where the other three roommates were leaving, I didn't have a car anymore (another long story - see motorsports history section) and my band was separating - at least for the summer. Rail went out to LA each summer for his "summer recreation" and to visit his friend Terry Walker. While there he did the Hoot Nights at the Troubadour and hung out on the strip. When he invited me to join him for the summer to see what it might produce I figured it was a good opportunity to see if I could really exist on my own. Rail also invited Rita to come so we could perform as a group; our goals were now getting pretty lofty. Sadly, she was "in love" at the time and decided to stay in Tallahassee over the summer. We told her this was a big mistake for her and I think history has proved us to be correct... So we packed up the car with our necessities (which included 3 guitars), two young ladies from school and their necessities and headed west to L.A. That trip was another story in itself...

L.A. was an eye-opening experience for me - in more ways than one...