Picture Gallery of Our First Snow at Home 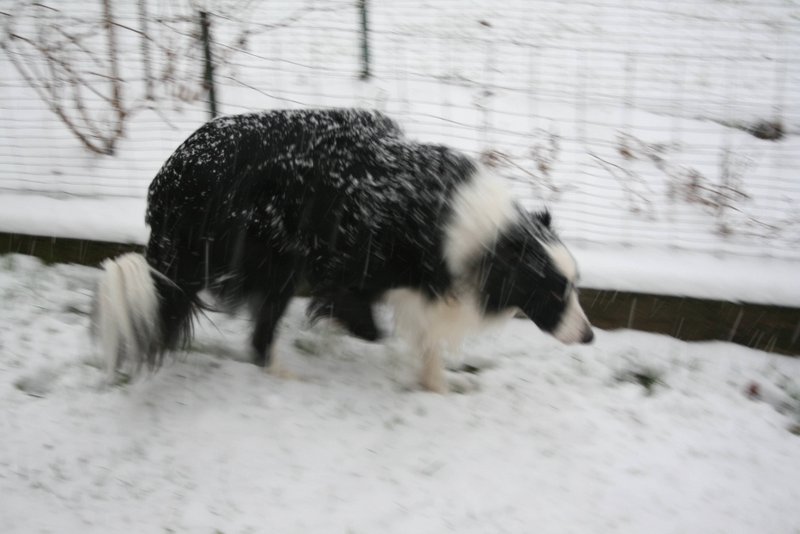 Rocky watched the weather forcasts in anticipation of our first snowfall in our new home - I watched thinking about the many snow storms I had to deal with in New England! The good news about the one bearing down on us here is that I didn't have to go out of the house! The forcasters were predicting rain during the early morning hours, changing over to sleet, then snow around mid-day so I left my plans to go into town to play at the bakery up in the air. Strider woke me up in the morning (Friday) whimpering to be let out so I peered out the window and, much to my surprise, saw that there was already more than a couple of inches of snow already on the ground! It was still snowing hard so I rousted Rocky out of bed so that she could enjoy the view of it as well. While Rocky was getting dressed I took Strider out for his morning walk which, surprisingly, he was less than thrilled with - go figure! 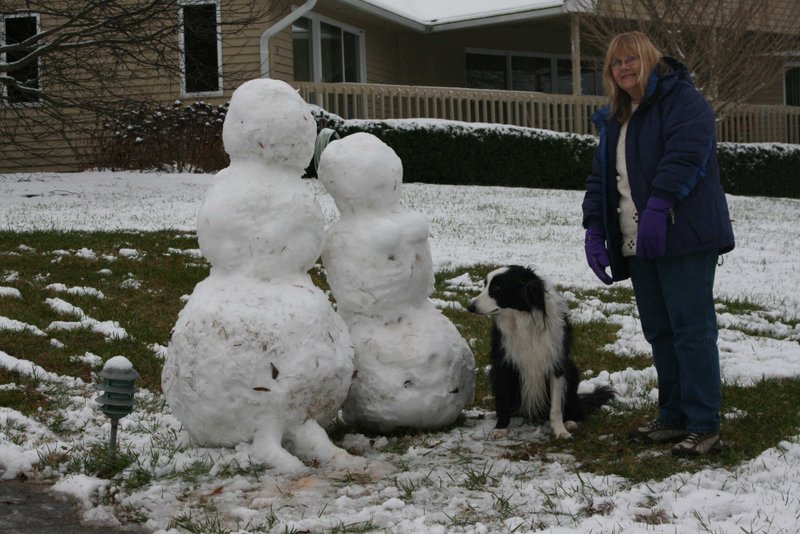 During the morning it continued to snow that heavy, wet snow that is just perfect for snowmen (and woman) construction so I asked Rocky if she wanted to join me in building one; imagine my surprise when she told me she had never built one! Well, then, we just had to remedy that! So out into the yard we went and proceeded to build a snow-couple in the front yard where the driveway lights would illuminate them at night for the neighbor's pleasure (right!). I had to show Rocky the "finer points" of snowman construction (like start it at the top of the hill so it could be rolled down the hill once it started getting big and heavy) but she did just fine and soon the basic structures were in place. This was about the time her gloves became pretty much soaked so she went inside to change them and brought Strider out to introduce him to our new inhabitants - amazingly, he behaved himself and didn't "annoint" them!

The snow started to pick up so we adjourned to the house to warm up and have some lunch, leaving the snow figures unadorned. Soon the areas of grass where we had rolled the snowballs became covered with the new fallen snow and turned to white again. After a couple of hours and no let-up, I decided to take some pictures of the surrounding area in case it turned to sleet or rain later. Those pictures are presented below. 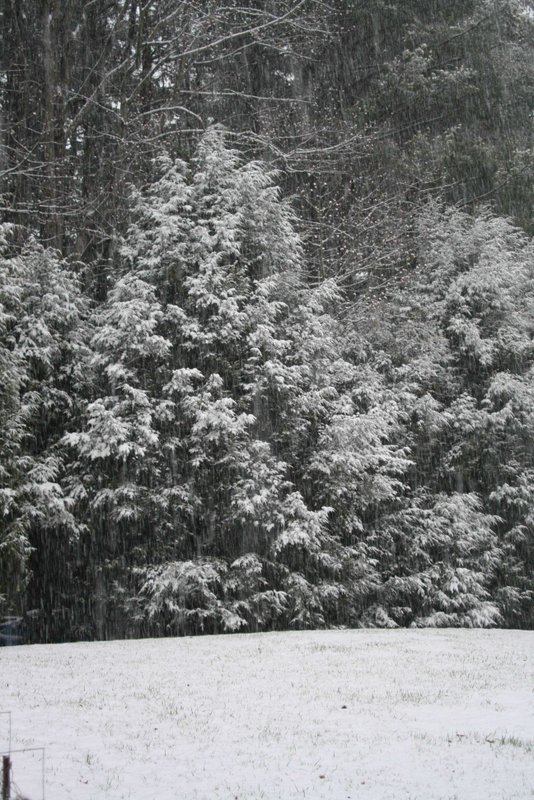 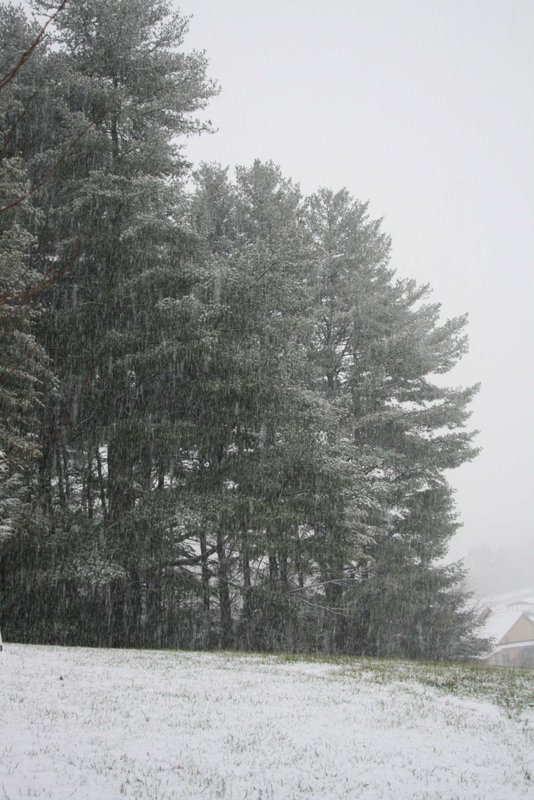 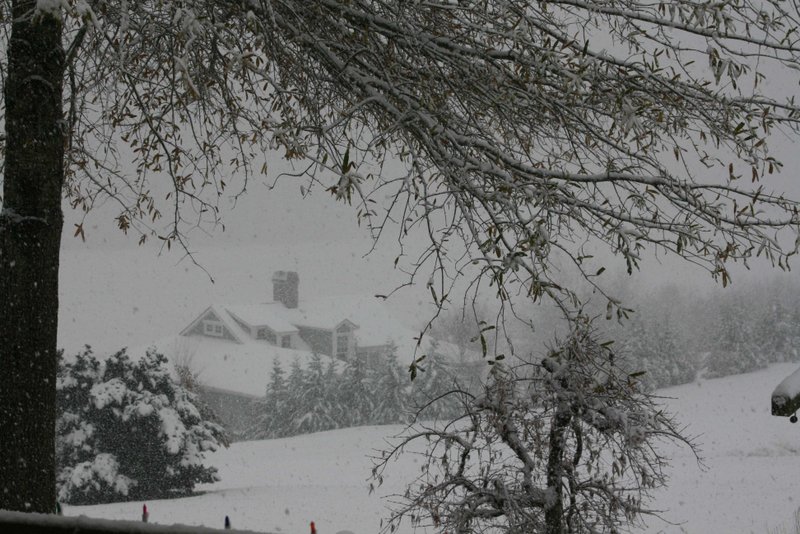 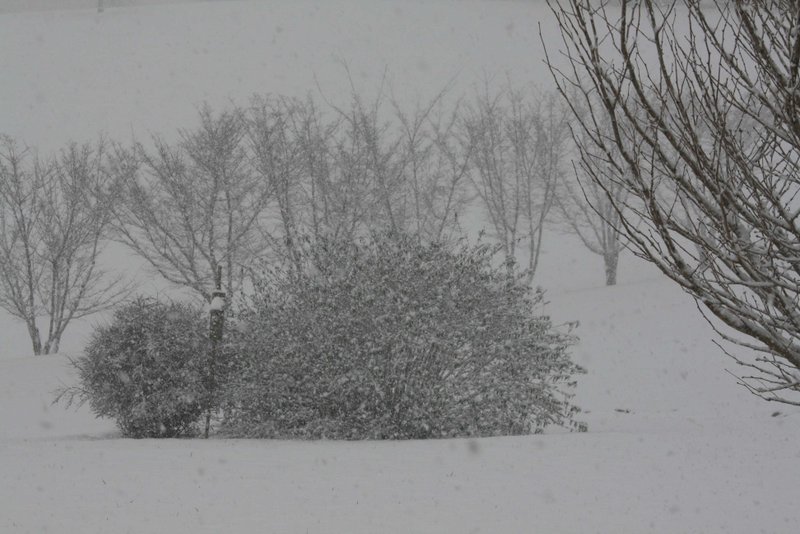 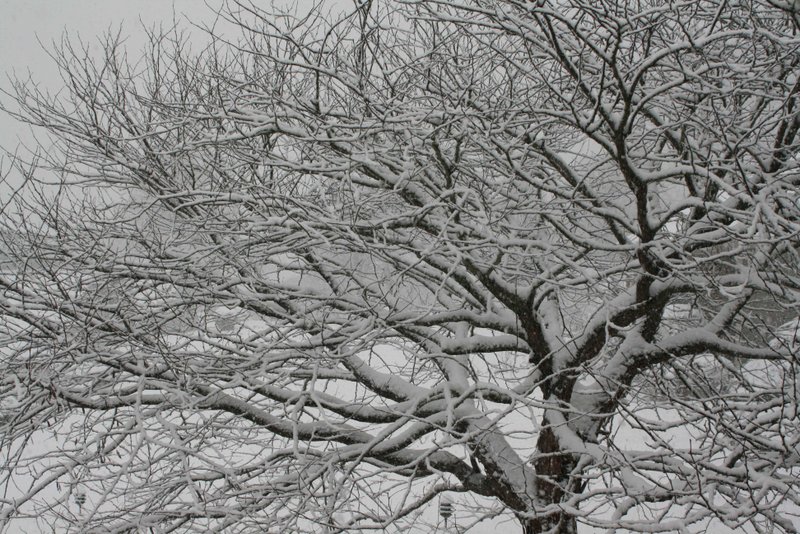 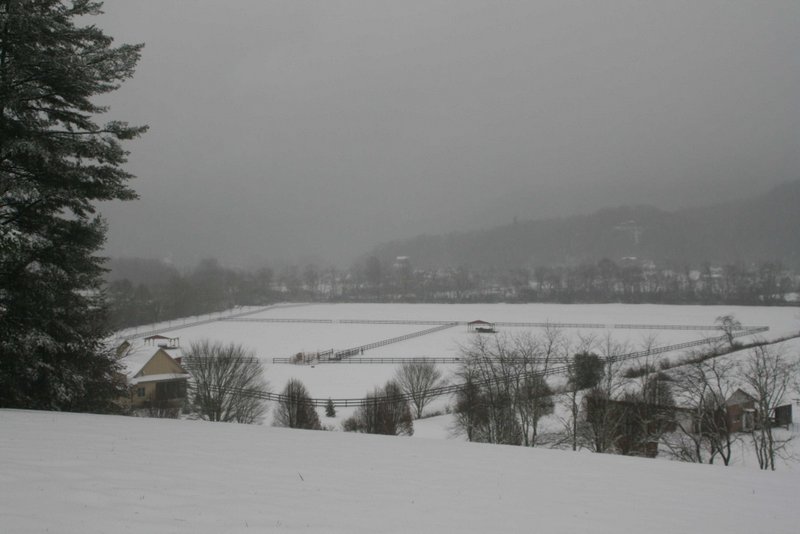 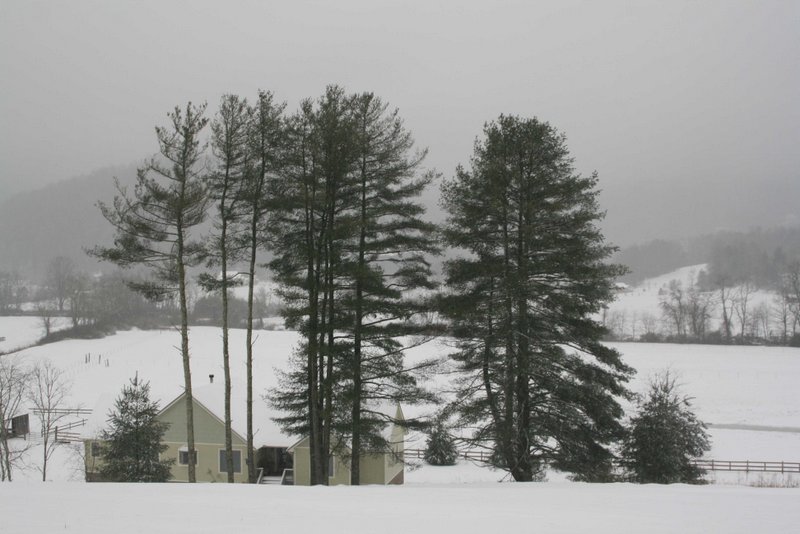 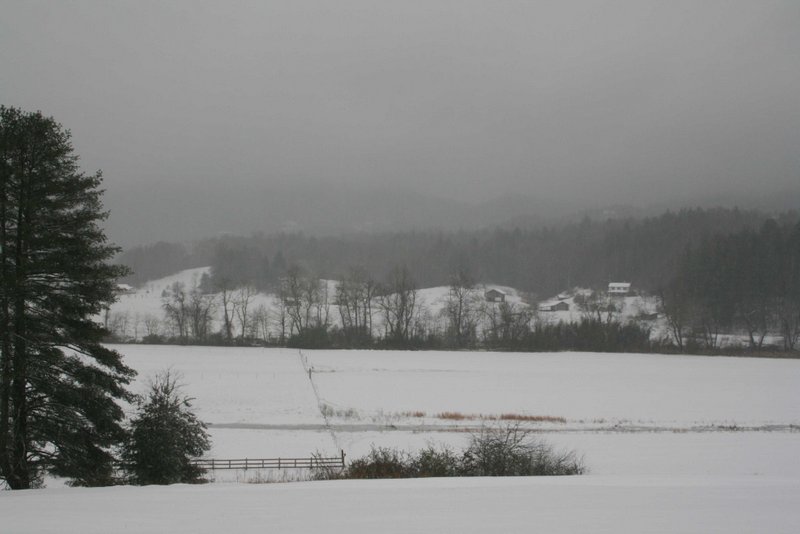 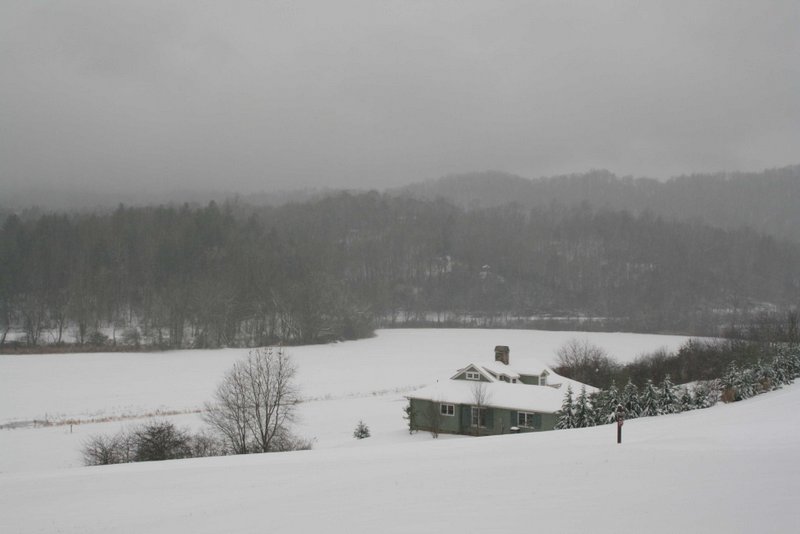 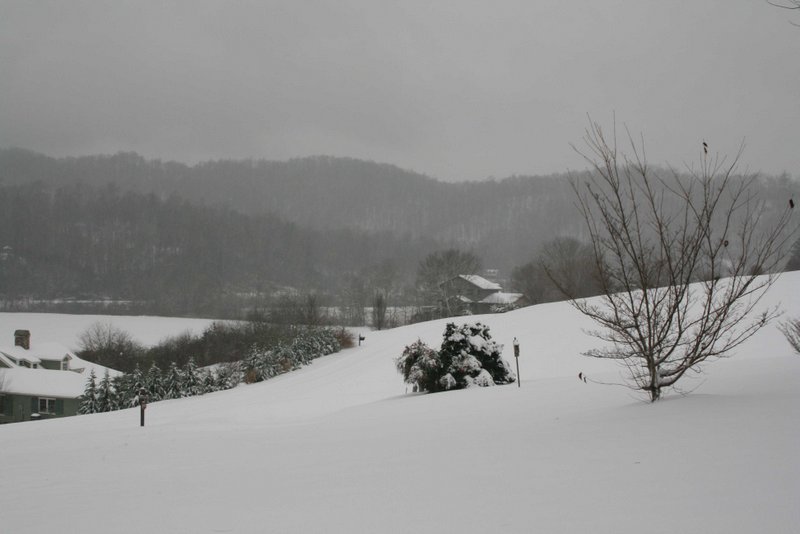 There's no denying the simple beauty of snow as it falls and covers up the landscape, turning everything to soft, white shapes. We watched as familiar shapes took on softer curves and new effects. I actually enjoyed it as the world around us turned to black and white and the daylight began to fade ... then the power went out.

After about 15 minutes of no power Rocky reported the condition to the electric company and I began bringing wood from the woodpile to the breezeway. From there we brought it into the house and right to the hearth. In a short time (and some help from Rocky) I had a fire going in the fireplace, providing heat to the livingroom/kitchen and a warm cheering light to the whole area. Rocky lit candles around the room and I fished out the flashlights. It was nice just sitting on the hearth, basking in the warmth of the fire as it built into a very nice blaze. Then, at about the 2-hour mark, the power returned and live (primarily the TV) returned to "normal". That meant we would have more than toasted marshmellows for dinner - yippee! 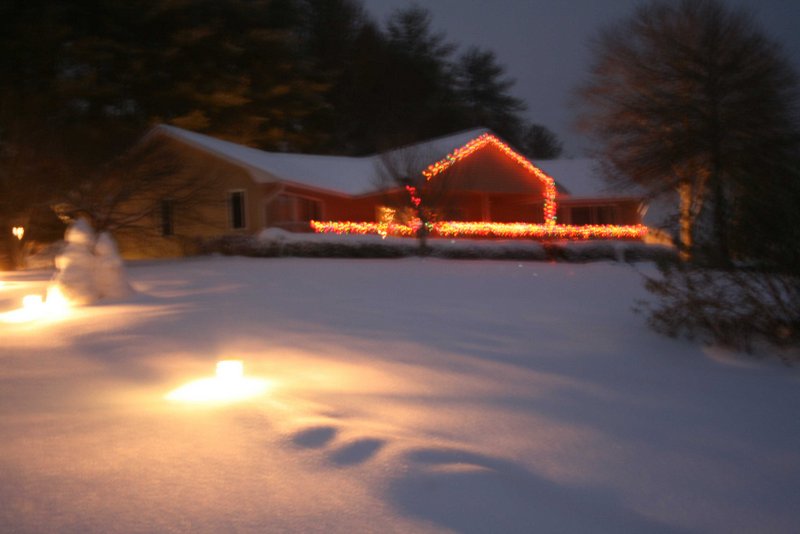 Rocky got dinner underway while I went outside to take a final picture of the snow figures at night. Since I didn't take a tripod with me, the Christmas lights are blurred but it gives a nice effect, none the less. A nice way to end the day and our first snowfall in our new home...

As always, you can send your comments and suggestions to the address below... Have fun and enjoy!