My Midnight Blue (MIM) Standard Strat is from 2000 and is another "player" with Schaller tuners, which I prefer.. It was one of my first eBay acquisitions made in late 2003 before I was even on meds! I think it was the purity of the color that first atracted me to the guitar, though it turned out to be a very playable instrument. I can't tell you about the tonal characteristics though because I don't believed I've ever played this one through an amplifier other that to make sure the controls worked when it first arrived. Oh, well, on to the pictures... 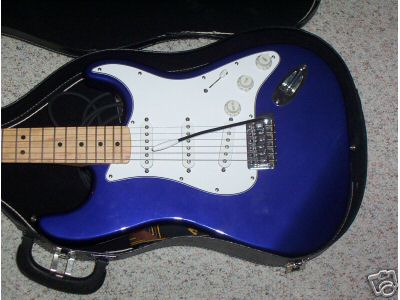 The case now used is an aftermarket tweed Fender look-alike which suites the guitar well.

So concludes the description and discussion of my 2000 MIM Midnight Blue Fender Stratocaster. I hope you've enjoyed the pictures even if I wasn't very informative about the instruments full characteristics; it's still nice to look at...

Price: $500 including aftermarket case (stated above) or $450 without case